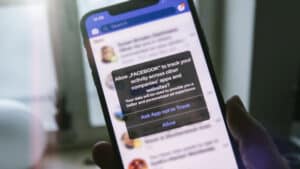 Facebook has warned advertisers that it may not be able to accurately measure the success of their adverts due a privacy clampdown by Apple in iPhone software.

The social media giant has added a disclaimer to its return on investment figures, which are crucial to advertisers’ confidence their money is well spent on its platform, saying they might now be missing data or partly based on “statistical modelling”.

Advertisers have told Business Matters that since Apple updated iPhone software last week, Facebook has provided unpredictable results that are much higher or lower than normal. One called the figures “nonsense”, while another described the system as “broken”.

The change shows how Facebook’s $84.2bn (£60.1bn) advertising operation could be affected by Apple’s move, which the social network has said will damage millions of small businesses that rely on targeted adverts to grow.

Carly Stringer, a Facebook advertising consultant in Maidstone who works with independent online retailers, said she had seen seemingly inflated numbers before the picture became murkier, while Phil Kiel, an e-commerce ad buyer in Liverpool, said he had seen mostly declines.

A spokesman for Facebook said it was too early to know the impact of Apple’s latest software update, iOS 14.5, which was launched on April 26 and could take weeks to be installed on a majority of iPhones.

The update forces apps to get clear consent before accessing users’ unique ID numbers, which can be used to link their activity across multiple services and track how they respond to specific adverts. Most people are expected to refuse, causing problems for companies big and small.

Facebook has fiercely opposed the policy, telling customers to expect turbulence while racing to adapt its systems. A spokesman said it had briefed advertisers extensively about the changes, having first warned in October some metrics would have to be estimated.

But Mathias Schroder, a ­Danish e-commerce entrepreneur and analyst, said the situation had broken the link between spending and clear returns that has made Facebook’s adverts so attractive to businesses.

He said: “Facebook can’t do anything about Apple’s decision, but they could give us a better understanding of what this means for our reports. How much of our data is modelled? Is it 10pc? 90pc? And more importantly, can we rely on the modelled data?”

In the days after Apple’s update, some advertisers reported bizarre surges in Facebook’s “return on ad spend” metrics, known as ROAS. Others said they had seen mixed results or downswings not consistent with other metrics.

Normally, ROAS figures are calculated by tracking which users spent money after seeing an advert. Now Facebook says they may not include iPhone users who opt out of tracking, and some will use modelling to cover that gap.

Gil David, an ad buyer in Belfast, attributed many of the increases to a change in how Facebook assigns returns to different days, creating a one-time bump as some income that had been ascribed retrospectively was yanked into the present.

Ms Stringer said: “I’m not trusting the data in Facebook right now because we’re in the early stages of the shift in how Facebook is reporting the data.”

David Herrmann, an ad buyer in Los Angeles, said he had seen more drops than hikes, concluding: “Clearly the system is missing a lot or taking too much credit… right now it’s hard to know what is truth to the platform and what’s real real.”

Tod Maffin, president of EngageQ, a social media agency in British Columbia, said the lack of transparency should be “cause for alarm for all digital marketers who use Facebook”, calling on the company to explain what data it had used to produce its estimates.

Advertising metrics are a sensitive matter for Facebook because it is fighting a class-action lawsuit in the US that accuses it of exaggerating past estimates. The company says those claims have no merit.

In 2019, it paid $40m to settle a lawsuit claiming that it had overstated the time its users spend watching video ads by up to 900pc, without admitting wrongdoing.

A spokesman for Facebook said: “It is premature to draw any conclusion about our ROAS metric based on a few anecdotes, especially so early on in the iOS 14.5 adoption process.

“For months, we have been transparent with advertisers about the implications of iOS 14.5 on targeting, delivery, measurement and reporting, and we continue to offer guidance to make the transition as seamless as possible.”

The company describes its estimated metrics as “[not] precise counts” but still useful as a gauge.

Since Apple’s update last week, Facebook has encouraged users to accept the tracking prompt on its own apps by telling them that it allows the social network and its sister app Instagram to remain free.

Mike Ashley’s Frasers Group to buy back shares worth £60m

Banks supervision needs to keep up with new...

Rates of Treasury bills likely to decline ahead...

Global race to tapering ignites hunt for next...