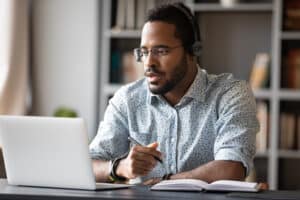 New research into the impact of the pandemic on the job-seeking landscape has revealed the huge levels of mistrust candidates have about the hiring process, as well as the tricks and tactics many are going to, to get hired.

Confirming just how tough the employment landscape is, three quarters of respondents agree that job-seeking has become harder due to the impact of Covid-19. Just over half of those who lost their jobs or were furloughed, say they’ve struggled to transfer their skills, and therefore get hired, in a new industry.

Not only that, but job seekers also feel that they’re losing out to unfair processes: two-thirds of job seekers believe when it comes to being hired, it’s about who you know at the company, rather than what you know and your experiences. And over half of job seekers feel the wrong people get hired because they know how to cheat the system, such as lying about their experience, qualifications or job history.

The research was commissioned by leading HR-tech company Tribepad and is based on the opinions of 1,000 job-seekers as part of its Navigating the Hybrid Hiring Era report.

Taking the initiative, or cheating their way to a job?

Due to the pandemic, nearly all job interview processes were digitised and taken online. The research showed that this has led to tech-savvy applicants taking a targeted approach when it comes to job applications.

Almost half are going for quality over quantity when it comes to applying for roles or sending out their CVs, and 39% are tailoring their CVs to match the required criteria for each role. A quarter even search online to learn from success stories of previous hires or find questions asked by the company on sites like Glassdoor.

Unfortunately, however, online recruitment has also led to a higher chance of candidates cheating or lying to get ahead; a third of young adults (30% of 18-24 year olds) admit to lying or exaggerating about their experience in order to get an interview. And across all age groups, a quarter of male candidates, were more likely to cheat on psychometric or other tests, compared to just 6% of females. An even larger proportion, 30% of males, lie or exaggerate about their experience, compared to 18% of females.

Commenting on the report, Dean Sadler, CEO of Tribepad said: “Job seeking in 2021 looks very different than it did just a few years ago. We’ve gone from record levels of employment, to record highs of unemployment in an instant. And that’s led to many people feeling frustrated with the hiring process, and losing trust in businesses’ commitment to hire fairly.

“At the same time, due to the increased use of technology, the savviest of candidates are changing their CVs to help them get noticed. While many tactics – such as using buzzwords and tailoring CVs and applications – should be viewed favourably. There also remains a small, but significant number of people willing to lie and cheat their way into a role.”

“Employers have to do more to make sure their processes are fair and thorough. We believe the solution lies in using technology to help manage this process, reducing the number of applications humans need to sift through; so that they can focus on ensuring the selection process is fair and accurate, and that everyone gets a chance.

Read more:
UK males are the most devious and deceptive when it comes to getting hired

Banks supervision needs to keep up with new...

Rates of Treasury bills likely to decline ahead...

Global race to tapering ignites hunt for next...